What’s that coming over the hill? Is it a sheep? Is it a horse? No, it’s a Llama! These fluffy and often ill-tempered creatures are one of the more recent introductions to the Minecraft mob roster. Read on to find out all there is to know about these weird and wonderful creatures.

What is a Minecraft Llama?

Minecraft llamas weren’t exactly the top on everyone’s request list for Minecraft features, but the more the merrier I always say! Not only do they serve a unique purpose to that of other Minecraft mobs, they’re also very unique looking and very cute too!

What do Minecraft Llamas do?

Llamas in real life are infamous for the often grumpy temperament and tendency to spit wherever they find themselves. In Minecraft, this is the same. Llamas in Minecraft are neutral by nature, but get on the wrong side of one and you’ll quickly find yourself wet and hurting all over. Llama spit deals half a heart of damage per hit, so try not to get on their bad side.

Like the aforementioned spitting tendency, Minecraft llamas also mimic their real life counterparts by being great pack animals, allowing you to transport large amounts of goods over far distances. You can easily attach chests to llamas to add 3, 6, 9, 12, or 15 inventory slots. Get a few llamas together to form a caravan and you’ve got yourself a moving storage room.

Not only are llamas great functional friends, but they also don’t mind indulging in a bit of fashion from time to time as well. Each llama has a carpet slot, which you can fill with different coloured carpet blocks to change the style of the patterned rug on the llama’s back.

What do you tame a Minecraft Llama?

Taming a llama is a pretty easy task, though it might not work immediately. To tame a llama, go up to it and ask it very nicely if it will let you ride it. If you’re lucky it might just say yes. Only kidding. To tame a llama, approach the llama of your choice and press the use button while you have nothing in your hand. Keep doing this until hearts appear above the llama’s head. Remember to equip your llama with a carpet though, otherwise you won’t be able to ride it.

✔Great for transporting lots of resources

What’s not so good about Minecraft Llamas?

X Have quite a temper on them

X Can take some time to tame due to grumpy behaviour

Some of the different carpet designs on llamas’ backs represent different mobs in Minecraft. For instance the purple variant represents the enderman mob. 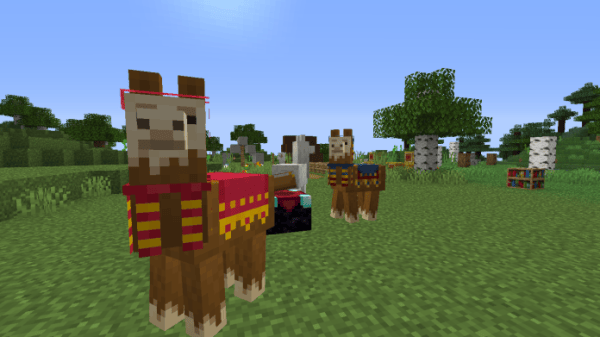 It has already been a given topic that some of the mobs that you can find in the game are absolutely rare while some are super common. In the recent updtes of Minecraft there have even been different types of fish now, Back in the days there was only a single type of fish.

With it's continous updates Minecraft Animals and Mobs will keep growing in variaty and variants making the game even more fun and exciting than ever before.