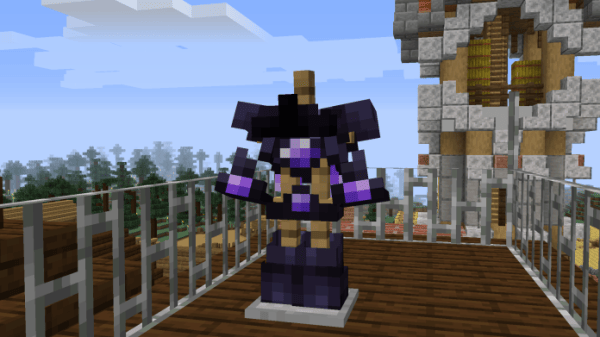 With the release of Minecraft’s latest update, the community has been treated to a brand new set of armor tools and weapons—netherite! Even more excitingly, players have already begun to create packs to reskin this awesome new armor set. The End Themed pack is one of those packs and you can read more about it below!

What is The End Themed Netherite Gear 1.16 Minecraft Texture Pack?

With the introduction of the game’s most impressive and highest-ranking equipment, the community has already started making fantastic reskins for the newest member of the Minecraft armor family. Netherite is the first new armor set in a very long time, so it shouldn’t be a surprise that players are clamoring to show off some artistic flair with these new pieces of content.

Yep! If you’re a player who appreciates looking cool while you are hacking, slashing, mining and digging, then The End Themed Netherite Gear 1.16 is the perfect way to ring in the brand new Minecraft 1.16 update.

By adding artistic flourishes, detail, and inventive texture design, this pack reimagines the debuting netherite gear into something that really reflects how rare and powerful the game’s latest addition really is.

Functionally, the netherite gear is exactly as it is in regular Minecraft 1.16, but the artistic vision is much more in-line with established Minecraft lore. Although 1.16 is the Nether update, it seems appropriate to use some inspiration from the End on the game’s newest and best set of armor.

There’s not much to discuss when it comes to Netherite Gear 1.16 since the amount of content is fairly sparse. Though, a minimal amount of content comes with the added benefit of better performance on a wider range of computers. Even players with less than great setups will be able to enjoy this pack thanks to its 16x16 resolution.

Still, this pack is a great way to celebrate Minecraft 1.16 and is a fantastic option for players that enjoy customizing their resource pack loadouts to something that reflects their own personal taste. Due to its small size, players can easily use the pack simultaneously with other resource packs without the worry of overlapping textures or other incompatibilities.

✔ Style is faithful to vanilla Minecraft

X Pretty simple pack that has a small amount of content

Desperate to put on some epic looking End-themed netherite gear? Who isn't? Well, with this short installation guide, you and your friends can have this particular resource pack installed in no time at all. You can also use the guide for most other packs too!

Alternatively, use a file explorer and make your way to one of the relevant file directories listed in the following table:

When you have the folder open, move the zip from earlier inside. Once that’s done go to Minecraft’s resource pack menu and activate Netherite Gear 1.16.

Below is where you can find download links for The End Themed Netherite Gear 1.16

At the end of the day, if you want to play Minecraft you first need to download OptiFine! There are millions of players in Minecraft who make sure that you are using fair mods that do not disrupt or bother gameplay of other players.