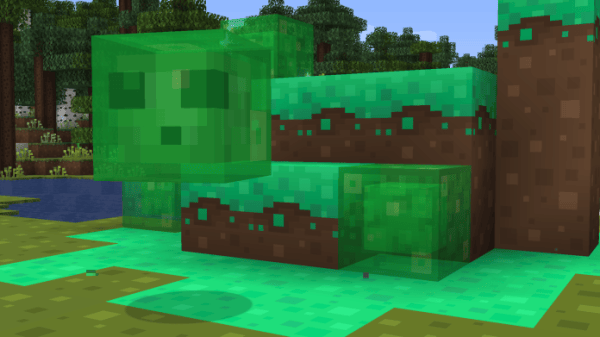 Slime! It’s sticky, green and...slimy? Slime has been a part of Minecraft lore for a long, long time. Maybe slime hasn’t got as much praise as it should’ve over the years, but now’s the time to rectify that. With Slime! 1.15, you can transform your version of Minecraft into a sticky and bouncy world of slime. Read on to find out how.

What is Slime! 1.15 Minecraft Texture Pack?

Slime 1.15 is a resource pack that is in love with slime. And who can blame it? Slime blocks might be one of the most under-appreciated blocks in the game, so it’s about time that it got its time in the limelight. Or should that be slimelight?

Yep! Slime! 1.15 is an awesome resource pack that really injects a sense of feel-good fun to the whole world of Minecraft. Taking a lot of inspiration from the game’s pre-existing slime block and other slime-related items, this pack imbues the game’s many textures into slime-esque pieces of bliss.

The pack really shines in the more natural and more visually intense biomes such as the giant mushroom biome, where the creator’s sense for wonder and adventure really shines through the textures’ charming design. The simplistic and wholesome approach makes Slime! 1.15 a great option for younger players or those who just want textures that are bit easier on the eyes.

The colour palette also shines in Slime! 1.15. Using the vanilla game as a reference point, Slime! 1.15 amps up the contrast and colour balance to increase the game’s fun factor by ten. It’s a very light-hearted pack at its core, giving off huge Terraria—and other similar indie game—vibes.

As a 16x16 resolution pack, Slime! 1.15 definitely benefits from using the same default resolution as Minecraft. Textures feel well composed and sized, even up close and playing with fullscreen enabled. That said, if you’re a big fan of high resolution textures, Slime! 1.15 won’t have what you’re searching for.

Unfortunately, as this is still a 1.15 pack, players who are already playing 1.16 will have to use the game’s vanilla textures for the new Nether content. However, the vast majority of the Nether is already textured, so there isn’t too much of a contrast between the vanilla textures and those of Slime! 1.15.

Slime! 1.15 comes highly recommended to most if not all players. Although it doesn’t have the highest resolution out there, it offers an effortless and fluff-free Minecraft experience that honestly can’t be matched.

X Not the best option for fans of high-resolution packs

X Pack isn’t yet updated for the 1.16 update

Installing Slime! 1.15 isn’t as hard as you might first think. If you’re brand new to the world of resource packs, then don’t worry, as down below you’ll find a simple installation guide that will demonstrate how to install pretty much any resource pack out there.

To start, download the zip file for Slime! 1.15 Minecraft Texture Pack. Store it in a place you can access easily as you will need it again later. For now, locate and open Minecraft’s resource pack folder.

One of the quickest ways to open the folder is through the game’s options menu, where you then need to select ‘resource packs’ and then ‘open resource pack folder’.

You can also find the folder through your computer’s file explorer. Access the folder without opening Minecraft by going to one of the following file directories shown in the table down below:

Once you have the folder open, simply plop the zip file for Slime! 1.15 inside.

Below is where you can find download links for Slime! 1.15 Minecraft Texture Pack

At the end of the day, if you want to play Minecraft you first need to download OptiFine! There are millions of players in Minecraft who make sure that you are using fair mods that do not disrupt or bother gameplay of other players.