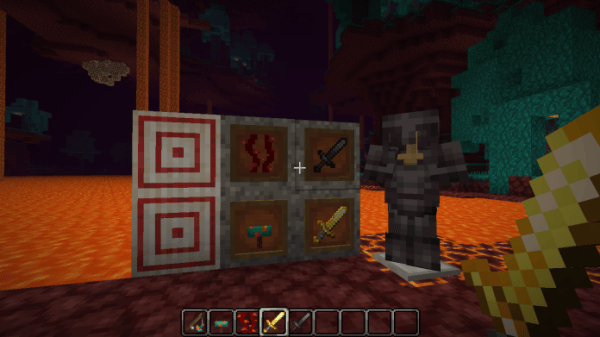 Nate's Tweak 1.16 Texture Pack is a long running resource pack that is now up and ready for Minecraft snapshot 1.16. What better way to explore all of the exciting new content awaiting you in the Nether than with your favourite resource pack by the eponymous Nate. Love tweaking your Minecraft visuals to make them just perfect? Then this is a pack you need to check out!

This tweak-focused resource pack is made by the one and only Nate. A small pack with a big history, this is one of the most popular packs found in the subgenre of resource packs that are based solely on altering vanilla Minecraft in small amounts. Thanks to Nate’s eye for detail and subtle retextures, this is definitely a pack that keeps on giving the more you play it

Is Nate's Tweak 1.16 Texture Pack fun to play with?

As I already mentioned, this pack is all about tweaks (hence the name). If you’re someone that just can’t get enough of vanilla Minecraft, then maybe it's time to start personalizing your Minecraft visual setup into something that truly reflects your own personal playstyle.

Fans of this pack who have been patiently waiting for the 1.16 version will be happy to know that all the classic Nate characteristics are here. One of the most easy to spot changes in this pack can be found in just about all of the most common blocks in the game. The grass block, although still firmly vanilla, has been given a fresh new look that makes the game feel just that little bit more special.

Lots of the same process can be seen throughout the rest of the game, with mobs, swords and other game content sporting familiar yet interesting new versions of their original counterparts.

But let’s talk about the Nether stuff. This is the Nether Update, afterall. The Nether looks great with this pack installed, and I had a fun time running around the place with Nate’s pack adding a layer of polish to everywhere I looked.

This is definitely a pack that is best experienced rather than simply read about, so I’ll leave it there for now. If you need a fantastically simple resource pack to accompany you on your new Nether adventures, then you could do a lot worse than Nate’s Tweak. Try it out for yourself and let me know what you think in the comments section down below.

✔ Very faithful to vanilla Minecraft and great for vanilla players

✔ Has no negative effect on the game’s overall performance

X Is not the most visually stunning pack available

Installing this pack (and most others packs too) is fairly easy. Still, I always make sure to include a simple guide so that you know what to do if this is your first time. Just follow the steps down below and you’ll be playing in no time at all.

Firstly, download the available zip file for Nate’s pack. You may need a file extractor file to extract the contents to a place of your choice. Next, go to your Minecraft’s resource pack folder and open it. If you don’t know how to find the ‘resourcepacks’ folder, simply go to the game’s option menu and go to resource packs>open resource pack folder. You may also use one of the appropriate file directories shown in the following table:

To finish installation, place the zip file you downloaded into the open resource pack folder. Then go to Minecraft’s resource pack menu and activate the pack.

Below is where you can find download links for Nate's Tweak 1.16 Texture Pack