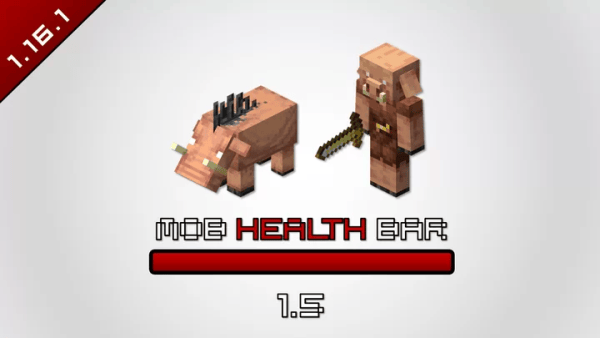 Mob Health Bar 1.16.1 (SSP/SMP) is a must-have! In Minecraft, players have to pretty much guess how much health most mobs (and players) have left. Trying to remember how many times you’ve hit someone with a sword can be a bit of a pain, so what if there was another way? Well, there is, and its name is Mob Health Bar 1.16.1.

Mob Health Bar 1.16.1 is really a data pack that does what it says on the tin. Somehow Minecraft has gone a whole decade without adding a generic mob health bar for the game’s enemies, so players have taken it on themselves to add the feature. It’s definitely something that comes in handy on those edge of your seat survival moments!

Heck yeah! Lots of data packs aim to increase the quality of life in the vanilla Minecraft experience, and Mob Health Bar 1.16.1 really isn’t any different. Its purpose is fairly simple: add a health bar for all mobs in the game.

What’s neat about this data pack is that it’s not just your standard zombies and creepers that are affected. Usefully, mobs like villagers, fish, and even other players’ health is displayed. This is a massive advantage in both survival and multiplayer modes, where knowing when to run or fight is a life or death situation.

Installation is easy too, following the same simple process of all other data packs. This is obviously handy as it means you can add the data pack to as many or as few of your Minecraft worlds as you like.

One downside to this pack is the sensitivity of the health bar. Using the bar is really simple, as all you need to do is point towards whichever mob (or player) you’d like to see the health of. The problem arises with how close you need to be in order for the health bar to activate. It seems like a fairly short distance (possibly even in arm’s reach), which could mean that taking the chance to see a mob’s health could mean you potentially lose some of your own.

That said, this data pack is super useful and comes highly recommended pretty much to all players. More features are never a bad thing, and this feature comes in handy way more times then it ever becomes a burden.

✔ An extra advantage to both singleplayer and multiplayer gameplay

✔ Very installation with no fuss needed

Searching to see the health of mobs are ye? Well, this is the best place for that! Take a gander down below to see how to get Mob Health Bar 1.16.1 installed.

Download the data pack. This will come as a zip file. Don’t open it, as you won’t need to fiddle with any of the contents.

When the download is done, make your way to Minecraft’s game files. Don’t know where that is? Here are two methods:

If you’re on windows, hit Win+R on your keyboard, then input %appdata% and enter it. Once the file explorer opens, click on the Minecraft folder.

If you have another OS or would just like to access the files differently, use one of the following relevant file directory locations shown in the table below.

If the data pack doesn’t seem to work, enter the “/reload” command into the chat box while playing with the world open.

Download Links of Mob Health Bar 1.16.1 (SSP/SMP) for Minecraft are listed below: