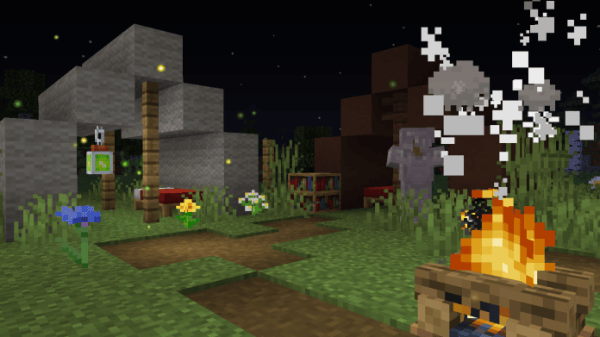 Illuminations Minecraft Mod 1.16 is a lovely detail mod that makes the world of Minecraft feel like a more living, breathing space to play in. Adding fireflies into the game through new items and particles, this mod is a super fun way to make your Minecraft playthroughs feel more dynamic and alive. Read on to hear all about this firefly mod. You will not believe your eyes!

What is Illuminations Minecraft Mod 1.16?

This mod adds fireflies into Minecraft 1.16. And while many of us are excited for the release of Minecraft dungeons and the Nether Update, what’s wrong with taking a little bit of down time? This mod adds firefly details into the game with pretty, dynamic floating particles and even a new firefly lantern. It’s a very simple but super effective mod pack if you’re a sucker for details like I am.

Is Illuminations Minecraft Mod 1.16 fun to play with?

You better believe it is. This firefly-focused mods is one of my favourite mod packs that I’ve got to try out in some time. I’m a big fan of small world building details like those offered in this mod, so I’m super excited to be covering it all for you today.

The way the mod works is simple, it adds some new particle effects (fireflies) into the game world. These spawn through use of two new grass types, firefly grass and tall firefly grass. These are indistinguishable from regular grass, so the mod has seamless integration with the game and it works perfectly with vanilla Minecraft.

The mod also adds a new craftable lantern, namely the firefly lantern. Although functionally the same as the game’s normal lantern, the fact that you can craft such a neat little detail is something I really appreciate.

The fireflies themselves aren’t actually creatures, entities or mobs of any kind. The newly added critters are in fact particle effects (so make sure to enable particles in your settings menu!). This could definitely be seen as a disadvantage to the pack, as many players will want an actual new firefly creature, rather than something that’s basically just a revamped particle, but opinion will vary on this.

I love this pack and I really recommend you all go out and try it. I love me some detail mods and this one is just a super simple and effective way of making Minecraft feel more lived-in. So go get installing this mod pack and enjoy some mushroom soup around a freshly lit campfire.

✔ Brings new detail and immersion into the world of Minecraft

✔ Adds new items in a way that is faithful to vanilla

✔ Makes excellent use of pre-existing Minecraft mechanics and features

X Fireflies are only particle effects, not mobs or entities

X Nothing else, honestly!

How to install Illuminations Minecraft Mod 1.16:

To install this particular mod, I will be using the Fabric mod loader. Don’t have Fabric already? Just go and download a version of the Fabric Loader that is the same as your version of Minecraft, and simply follow the instructions displayed by the installer jar file. Note: you will need to download the Fabric API and place the jar file into your ‘mods’ folder, which we’ll get to in a second.

Once you have Fabric installed, download Illuminations and take the jar file and move it into the ‘mods’ folder shown in one of the file directories shown below:

When you find and open the ‘mods’ folder in the file directory, place your Illuminations jar file into the mods folder (this is also where your API jar should go). To play with the mod, just open the game using the Fabric 1.16 profile on the Minecraft Launcher.

Below is where you can find download links for Illuminations Minecraft Mod 1.16